We saw these durians for sale on a street stall and, of course, we had to try this tropical fruit. They sold us four slices on a nice take away container PLUS two plastic gloves because durians smell very strong. We found ourselves a suitable place nearby and had a go. Not a success, but we kept the rest just in case it was an acquired taste. Back at our Fragrance Hotel room we soon realised that keeping the package inside *several* plastic bags wasn't having an effect on the overpowering smell. At which stage we decided that it wasn't worth having another go... I took it to a guy having a rest on a recess on the pavement and his face lit up with delight at the word durian! 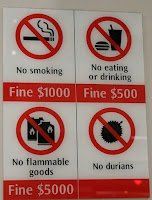 Singaporeans love this fruit, however there are some regulations about it in public places. We soon found here that they are forbidden in the underground.
Just in case, next day on our way to the Botanical Gardens we checked in the underground and indeed there it was the same notice, see left.

Coincidentally, at the gardens there was the most amazing Elephant Parade and one of them was a Delightful Durian by Nat Posila & Ed Robinson.

To cap this durian experience, at the Singapore National Museum I bought a tee-shirt with a durian drawing from the William Farquhar Collection of Natural History Drawings. No smell.

Posted by Maria Fremlin at 06:19 No comments:

Sydney Botanical Gardens, NSW, Australia
05.01.2012
Flying foxes are huge fruit bats. We were positively delighted when we found a colony or camp in the Sydney Botanical Gardens. This was most unexpected because they colony in the Melbourne Boatnical Gardens was no longer there and this was rather disappointing because back in 1990 there were many there.

They were rather restless.
Even though grey-headed flying foxes are an endangered species they weren't exactly welcome in the gardens. They are doing too much damage to the trees and ideally they should not be there, at all. This is rather embarrassing. However the colony is beeing heavily monitored.
Note the colour bands on the thumbs of the wings: red on the left and blue on the right.
The curious thing was that the males were the restless ones.... Females protect their young with the wings during the day but at this time of the year their young shouldn't neede that. For more about these amazing bats visit SydneyBats
Later, in North Avoca we came across another camp by the lagoon. Someone told us about it and we knew when we were getting closer by the smell. Rather powerful. Again, they aren't exactly popular. Someone has tried to shoot them! See http://express-advocate-gosford.whereilive.com.au/news/story/shots-fired-as-bats-move-in-at-north-avoca/
Posted by Maria Fremlin at 21:20 No comments:

I've managed to get nice photos the New Zealand Christmas tree in bloom. Also their magnificent cousins, the ratas. Just bear with me for the photos. Life is rather hectic at the moment...

Posted by Maria Fremlin at 20:09 No comments:

We came across a patch of sundew plants in a rather unexpected place along the trail, just a the base of a rather wet vertical slope on one side of the path.
To my inexpert eye these plants look very similar to the ones that we found in Fiordland NP, see
http://maria-fremlin.blogspot.co.uk/2011/12/carnivorous-plants-in-fiordland.html

Here they did seem to have accumulated a lot of dew or rain!. Here is a close-up of a big drop.

Close by there was another mat of sundew plants that seemed to be more branched than the ones shown above. have a look and if you don't agree with me, please let me know.

Here is a close-up of the way it branched.

Please, let me know if they were all the same species, that is, Drosera binata.

This is my fifth and last blog post about sundews. When I started this blog I knew nothing about Drosera species and had never heard about triggerplants and bladderworts! All carnivorous plants. Lots of fascinating learning. Please correct me if I have made any mistakes!
The other posts about carnivorous plants are here:

A brochure about these boulders on private land attracted my attention when we first passed Bulls on our way south and on our return journey we decided that we had time for a little detour. The brochure had a very sketchy map and no other information about the path off the main road. First it was along a minor road, then along a very narrow unsealed road bordered by steep slopes and finally down a very steep track suitable for 4WD. Alas we realised that only when we were already on it and all we could do was to drive the most scary 600m down to ‘the flat’. Well David was at the wheel and brought us down safely.
Rather shaken we set out for the boulders without a clue about the walk, no water bottle and no food even though it was lunchtime. Fortunately there were some trail signs.
The landscape was pasture land rather beautiful. Stunning sandstone cliffs.
Then we had to get past some cows... Now NZ farmers are reverting to cows; more profitable with the Chinese market.
The trees were oaks planted by setlers, of course. Exotic trees attain rather large sizes in NZ.
Soon we passed some sheep.
Down and down we went. Until, finally, right by the river we came across the boulders.
Later, we discovered a pit toilet equipped with water, toilet paper and hand soap. Unfortunately, the water was not drinkable. I could have done with some!
Now, seeing the boulders was a bit surreal. The place was a little oasis that had escaped the systematic land clearing. One could imagine how the whole area could have been before the settlers arrived. Also how hard it would have been for them to clear the bush and the utter isolation of the place.
The trees had a primeval look to them. We couldn't see their tops but their roots were full of character.
In all it was the most amazing walk. The contrast could not have been greater from the DOC well sign posted and documented walks. A very nice change.
For more about the formation of these boulders visit http://www.whitecliffsboulders.co.nz/

PS: At the second attempt David did get the car up the steep slope. Just! I walked up and opened the gate at the top so that he could go through without having to stop. It was a tremendous relief to find ourselves and the car in one piece back on the narrow lane. Quite an adventure!
Posted by Maria Fremlin at 20:39 No comments:

Paddle board - a new sport?

Lake Roititi is extremely popular with the Kiwis. They came with their families, boats, barbecues, and paddle boards. It is an extremely beautiful lake, 630 meters above sea level.

The kids were really having a lot of fun in the water!

By lake Roititi you could not possibly have missed this remarkable scale insect. The females exude honeydew out of a very long hair like stalk and they had colonised many trees - the trunks looked rather hairy...

Also there was a special sweet fermented scent by those trees. Their trunks were black because there is a black fungus that loves it, hence the name 'sooty scale insect'.

I had heard that there was a scale insect associated with the southern beech trees but I had not seen it yet. So I was positively thrilled to see this and frantically busy with the camera trying to capture this remarkable phenomenon.
Let me explain what was going on. The scale insects feed on the sap and exude the extra sugars, the female does it in a very dramatic way from a stalk. Then this nutritious sugar feeds a lot of other animals: insects, birds and reptiles. I saw one weevil, some tiny moths and quite a few wasps. Now they were rather interesting to watch drinking the drops.
There weren't that many wasps, it took me a while to capture one drinking. These wasps arrived in NZ uninvited and as later in the season they would be robbing the native wildlife of a very good food source something had to be done. So then they load traps with Fipronil, the workers take it to the nest where it kills the colony. Currently the traps weren't loaded.

Southern beeches are rather beautiful New Zealand trees. They belong to the genus Nothofagus, Family Fagaceae. This scale insect does not attack the silver beech N. menziesii, their trunks are silvery white.